The inauguration of the Binus Malang campus, Wednesday (10/23/2019), was also used as an arena for BINUS University to proclaim BINUSMalang as a Digital Technopreneur Center that will unite ecosystems to encourage the growth of Digital, Technology and Entrepreneurship in East Java and eastern Indonesia. 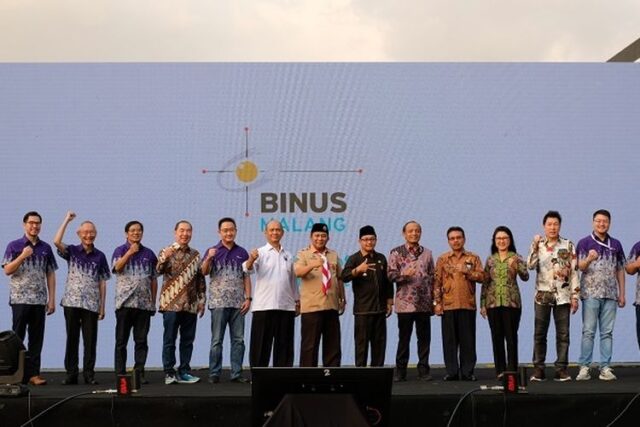 Rector of Binus Malang, Dr. Boto Simatupang, said that the biggest challenge for tertiary educational institutions today is the rapid development of the world of education and continuing change, especially in the era of innovation and industry disruption.

“It’s no longer just the main responsibility of the government to prepare human resources in the face of disruption, educational institutions must also be able to quickly adapt to play a role in building synergic ecosystems in the current era. Anything is digital, then tertiary education has to be serious in that direction,” said Boto.

The most important thing for Binus Malang today is digital literacy and preparing superior human resources in terms of entrepreneurship based on digital technology. For this reason, the campus in Malang is preparing a digital technopreneur concept.

“The concept is reinforced by the 2 + 1 + 1 program which gives students the opportunity to study for 2 years at the original campus, then one year to study at Binus Jakarta or Binus Bandung, then one more year to take one of the enrichment programs from the 5 paths provided, “said Boto.

He said, this program will form students to have a balanced soft skill and hard skills to be ready to face global competition. Head of the Institute of Higher Education Service Region 7 of East Java Province, Prof. Suprapto, who was present at the inauguration of the campus said that Binus Malang was a campus that was born later among 64 other private campuses in Malang. But, even though he is still a “baby”, Binus Malang is judged to be more mature.

“Binus anticipation for industry 4.0 is faster than others. I hope this can motivate others, because if universities cannot answer that need, fight the disruption, students will not progress. They will be left behind,” Suprapto said.

Stephen Wahyudi Santoso, President of Higher Education at Binus University, who also gave a speech at the event said that Binus’ development and plans for the future were expansion to develop and empower the community, especially in Eastern Indonesia.

Binus currently has more than 36,000 students from all over Indonesia and more than 130,000 alumni spread throughout the world. As an educational institution that educates young people, continued Stephen, Binus must be able to guarantee and maintain the quality of education throughout its campus.

“Binus Unification is a unit. Although there are many campuses, even outside the region, we will apply academic and operational standardization,” added Stephen.

Binus currently has more than 36,000 students from all over Indonesia and more than 130,000 alumni spread across many countries.